Micro-X is pleased to announce the first public showing of the new design for its IED X-ray Camera was made with a representative space-model at the Army Robotics Exposition 2021, held on the 20th April.

The Army Robotics Exposition (ARX 2021) was a by-invitation-only event hosted by the Australian Army and provides a platform to showcase Robotics Autonomous System (RAS) concepts and technologies. The Exposition is part of the Chief of Army Symposium 2021 and, shaped for domestic audiences, provides an opportunity for Defence personnel to view available technologies and innovations which may be applied to the future operating environment. A theme of the Australian Defence Force’s RAS strategy is Force Protection, particularly through removing soldiers from some of the most dangerous battlefield activities including Counter-IED tasks.

The need for an IED X-ray camera was first addressed by Micro-X under a contract from the Australian Department of Defence to develop a remote-viewing x-ray imaging camera which can be carried down-range by a robot to allow rapid assessment to be made safely, potentially saving bomb technicians’ lives.  Traditional  x-ray imaging requires manual placement of an x-ray detector behind the target object, with obvious associated risks. Micro-X’s proprietary technology has removed the need for a separate detector and enables images to be captured by viewing from a single side, like a camera.

Micro-X’s Product Line Manager, Shaun Graham, was in attendance to showcase the new design shape and portability of the IED X-ray Camera to the Counter-IED community, Army Engineers, Special Operations Team members and Explosive Ordnance Disposal technicians. Lead engineers involved in Micro-X’s development program were also on hand to provide technical updates on the operation and control of the product as well as show examples of the product’s image quality in typical IED threat scenarios.

The technology employs the company’s sovereign Carbon Nanotube Technology providing a lightweight robot-deployed Rapid Assessment X-ray imager, removing the EOD Technician from one of the most dangerous battlefield tasks and eliminating the Operators’ ‘Time Over Target’.

Micro-X’s Managing Director, Peter Rowland, commented “Our team at the Expo were very excited at the reactions to the small size and weight of our new backscatter imager from the Counter-IED community and how easily it interfaced with a number of robots already in service with both military and police EOD teams.”

“Interest is already building to witness prototype demonstrations planned by the Company for later this year. The product’s design has evolved substantially since its initial testing with the Australian Department of Defence and we are proud now to showcase this much more mobile, agile and robust product” he added. 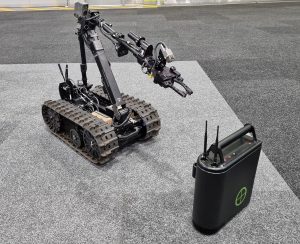 Micro-X, based in the Tonsley innovation hub in southern Adelaide, has developed world-leading, proprietary technology for miniaturising x-ray sources, made possible by the discovery of Micro-X’s patented carbon nanotube (CNT) emitter technology.